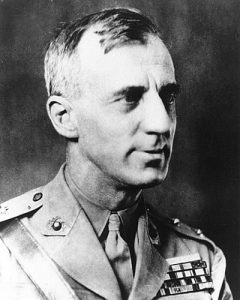 Smedley Darlington Butler (July 30, 1881 – June 21, 1940) was a United States Marine Corps major general, the highest rank authorized at that time, and at the time of his death the most decorated Marine in U.S. history. During his 34-year career as a Marine, he participated in military actions in the Philippines, China, in Central America and the Caribbean during the Banana Wars, and France in World War I. Butler is well known for having later become an outspoken critic of U.S. wars and their consequences, as well as exposing the Business Plot, an alleged plan to overthrow the U.S. government. 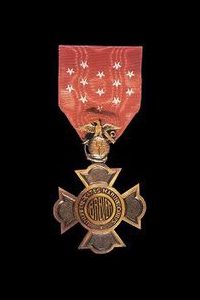 In 1933, he became involved in a controversy known as the Business Plot, when he told a congressional committee that a group of wealthy industrialists were planning a military coup to overthrow Franklin D. Roosevelt, with Butler selected to lead a march of veterans to become dictator, similar to other Fascist regimes at that time. The individuals involved all denied the existence of a plot and the media ridiculed the allegations. A final report by a special House of Representatives Committee confirmed some of Butler’s testimony.

In 1935, Butler wrote a book entitled War Is a Racket, where he described and criticized the workings of the United States in its foreign actions and wars, such as those he was a part of, including the American corporations and other imperialist motivations behind them. After retiring from service, he became a popular activist, speaking at meetings organized by veterans, pacifists, and church groups in the 1930s.